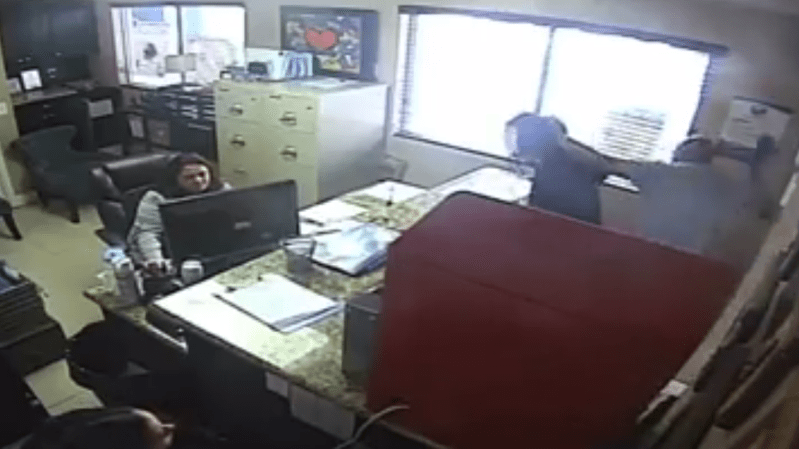 SHOCKING video footage shows a cop slap, punch and whip his teenage daughter with a belt after she “disrespected” a teacher.

Miami-Dade police officer Raymond Rosario, 44, was called to his 14-year-old daughter’s school after she was misbehaving during lessons.

CCTV footage at Pinecrest Cove Preparatory Academy in Miami showed him hitting her and he was later arrested on a child abuse charge following the incident on March 19.

According to NBC, the police report said that Rosario punched his daughter in the face and footage shows him hitting her with a belt on her legs twice.

The news site also claims a pregnant woman was one of two people in the room when Rosario was punishing his daughter.

The arrest report stated that the teenager did not ‘sustain any visible injuries and/or bruises’.

According to reports, Rosario, who became a police officer 24 years ago, was suspended by the force with pay.

In a statement, the school said: “The school followed procedure in response to the unfortunate incident which occurred in the office.

“The witness reported the incident to administration as soon as the parent left the premises and the school immediately reported it to the Department of Children and Families who contacted law enforcement.

“The school is continuing to investigate the incident and protocol.

“The parent, who is a police officer and who often visited the school in uniform, surrendered himself to authorities.

“The person witnessing the act is an expectant mother who was unsure if the parent had a weapon.

“She says that at the time she feared for the safety of the victim as well as that of her unborn child.”

via Cop slaps, punches and WHIPS daughter, 14, with a belt in school office in front of administrator as she ‘disrespected teacher’ — The Scottish Sun