A federal agent was shot in the face early Friday while working undercover in a joint mission with Chicago police officers on the South Side. BY MADELINE BUCKLEY AND JEREMY GORNER  CHICAGO TRIBUNE 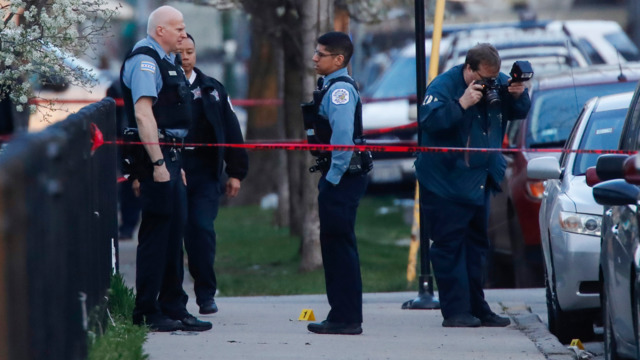 Chicago police mark evidence and gather at 44th Street and South Hermitage Avenue near where an ATF agent was shot and critically injured while working undercover in a joint mission with a Chicago police task force, Friday, May 4, 2018.
JOSE M. OSORIO/CHICAGO TRIBUNE/TNS

CHICAGO — A federal agent was shot in the face early Friday while working undercover in a joint mission with Chicago police officers on the South Side, authorities said.

The agent with the Bureau of Alcohol, Tobacco, Firearms and Explosives was wounded around 3:15 a.m. near 44th Street and Hermitage Avenue in the Back of the Yards, not far from Davis Square Park, police said. He was taken to Stroger Hospital in critical condition, but officials said his injury was not considered life-threatening.

A second officer was taken by ambulance to a hospital for observation, but was not injured.

No one was in custody.

The agent was part of a strike force formed last June to cut the flow of illegal guns into Chicago and crack down on people repeatedly arrested on gun charges, officials said. Twenty ATF agents were assigned to the task force, along with 20 officers from the Chicago Police Department and the Illinois state police.

In Back of the Yards, the ATF agents have teamed with Chicago police to investigate gang-related rifle shootings that have become more common in that area over the last two years. The Tribune has reported that more than 140 people have been shot — 50 of them fatally — from the fall of 2016 to the end of 2017 by gang members wielding rifles as their use spread across the South and Southwest sides.

Officials said the agent was shot during an investigation of illegal guns, but no details were available.

Luz Campos, who lives several houses down from the shooting, was in her kitchen tending to a toddler when she heard someone say, “Open the door. Open the door.”

She then heard what she thought were fireworks. “Then the cops were coming,” Campos said.

She stepped outside with the young boy and saw a rush of police cars. The boy stood behind her and waved to an officer who was walking toward the shooting scene. The officer waved back.

Other neighbors said they heard a barrage of gunshots. One woman said they were too numerous to count.

Another woman, who was asleep on a couch in her front room, said she awoke to continued gunfire. “We just heard a lot of shots,” she said.

By sunrise, groups of ATF agents and Chicago police officers — at least two of them high-ranking department officials—walked up and down 44th Street near the shooting. Gusts of wind shook yellow crime tape as children with backpacks headed to school.