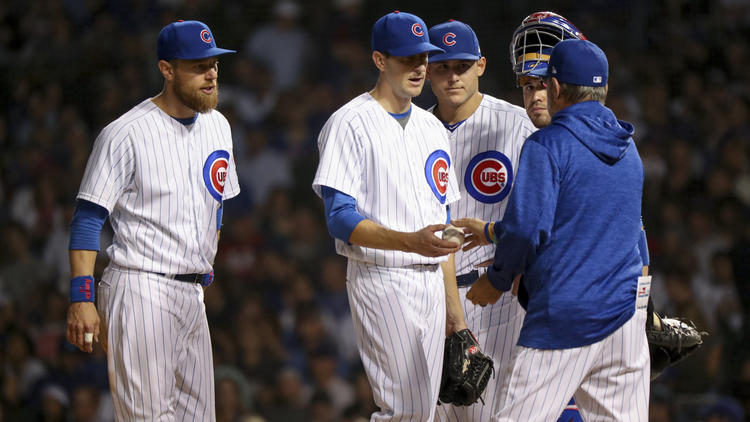 That was a tough game. Anthony Rizzo‘s leadoff home run couldn’t boost momentum for the Cubs after Kyle Hendricks watched back to back home runs soar into the stands. The Cubs took one on the chin last night 3-1

“It was all there and I felt good about it,” Joe Maddon said of having Rizzo in the leadoff spot. “We weren’t striking out, we were moving the ball. Gray got better, game in progress. He seemed to get sharper. The thing he did well today from the side was first-pitch breaking-ball strike, whether it was his slider or curve. It was uncanny getting the call on that pitch. That was the separator for me. Whenever you get a starter who continually throws his breaking-ball pitch [for] strike one, it really sets them up after that.”

The calls weren’t spectacular. I’m a little bit biased when it comes to Kyle Hendricks and there were quite a few calls that went unnoticed. Even after Hendricks gave up the home runs, he settled in and went deep into the game, which I think, if you’re not having a solid game, it’s great to settle down and get back to the basics.

“It was a bad pitch to Blackmon — I didn’t want to walk him — and the wrong pitch to Dahl but not a bad one,” Hendricks said. “Overall, I felt really good about [the outing]. The fastball command was good. I got quick outs, went deep into the game. I’ve got to take the positives from that one.”

Hey, didn’t Rizzo look awesome in the leadoff spot? Last year he joked that he was the best leadoff hitter in the game because he kept blasting the ball out there.

“I really thought we needed something like a 20-foot python, a magician or a break dancer in the clubhouse,” Maddon said of his reasoning. “Instead, I chose to hit Rizzo leadoff. I thought it might pick the boys up a little bit.”

Why not? Every Cubs fan appreciates the inventiveness and creativity of the outgoing manager. Sometimes, baseball can get methodical and if there’s no rule about doing something different, then Maddon will find it, try it out and if it doesn’t work, then it doesn’t work.

“Leading off is leading off — you’re the first hitter in the game, you come up a lot, and I want all the at-bats I can get,” Rizzo said.