WASHINGTON — President Trump lost no time hailing the historic nature of Friday’s meeting between the leaders of North and South Korea. But the gauzy images and vows of peace by Kim Jong-un and his counterpart from the South, Moon Jae-in, have complicated Mr. Trump’s task as he prepares for his own history-making encounter with Mr. Kim.

While the two Korean leaders pledged to rid the heavily armed peninsula of nuclear weapons, they put no timeline on that process, nor did they set out a common definition of what a nuclear-free Korea would look like. Instead, they agreed to pursue a peace treaty this year that would formally end the Korean War after nearly seven decades of hostilities.

The talk of peace is likely to weaken the two levers that Mr. Trump used to pressure Mr. Kim to come to the bargaining table. A resumption of regular diplomatic exchanges between the two Koreas, analysts said, will inevitably erode the crippling economic sanctions against the North, while Mr. Trump will find it hard to threaten military action against a country that is extending an olive branch. 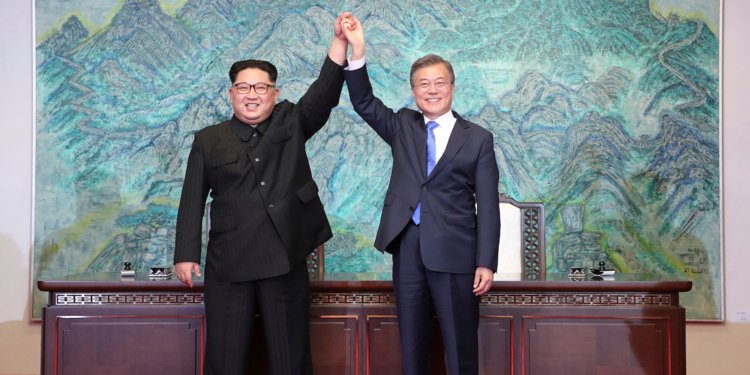 To meet his own definition of success, Mr. Trump will have to persuade Mr. Kim to accept “complete, verifiable and irreversible denuclearization” of North Korea — something that Mr. Kim has shown no willingness to accept in the past, and few believe he will accede to in the future.

“This summit has put even greater expectations, greater hype and greater pressure on Trump,” said Victor D. Cha, a Korea scholar at Georgetown University who was considered by the Trump administration to be ambassador to Seoul. “He hyped this meeting with his tweets, and now the entire focus is going to be on his negotiating prowess.”

“This is a moment of his own making,” Mr. Cha added.

Characteristically, Mr. Trump betrayed no anxiety in recent days as he discussed the challenges of the summit meeting, which is scheduled for late May or early June in a location still to be determined. He took much of the credit for the diplomatic thaw on the Korean Peninsula, and he said he would not commit the mistakes of his predecessors, whom he said had showered the North with money and extracted nothing in return.

“The United States has been played beautifully, like a fiddle, because you had a different kind of a leader,” Mr. Trump said after meeting with Chancellor Angela Merkel of Germany at the White House. “We’re not going to be played, O.K.? We’re going to hopefully make a deal; if we don’t, that’s fine.”

Mr. Trump reiterated that he was prepared to cancel the meeting, or walk out in the middle of it, if his diplomatic efforts were not making any headway. But some of his aides say privately they worry that the president, with an eye on the history books and a flair for the theatrical, is determined to emerge with a victory, even if it falls short of his stated goals.

Certainly, he seemed beguiled by the imagery of the Moon-Kim meeting. “KOREAN WAR TO END!” he tweeted before 7 a.m. on Friday, a few hours after the leaders shook hands in the Demilitarized Zone.

On Saturday, Mr. Trump said he had a “very good talk” with Mr. Moon. “Things are going well,” he tweeted. “Time and location of meeting with North Korea is being set.” Later, at a rally in Michigan, Mr. Trump told supporters that he deserved virtually all the credit for the success of the meeting between the North and the South. 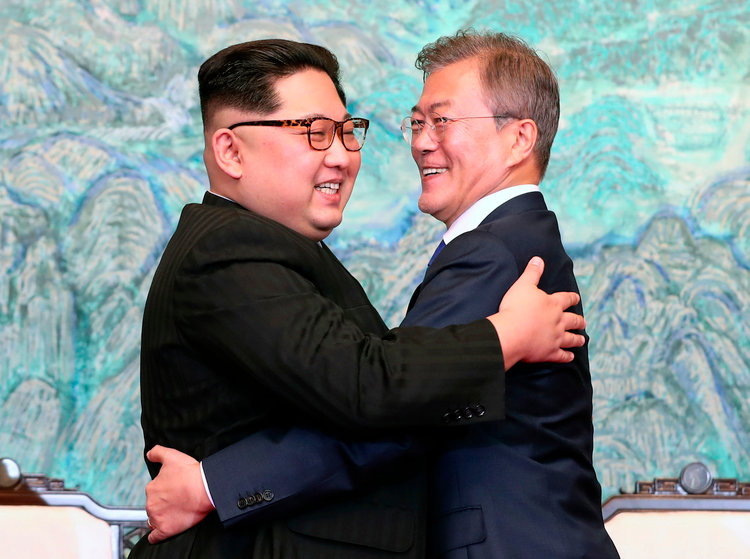 The price of failure would be high for Mr. Trump. The United States could face a split with its ally South Korea, which is deeply invested in ending its estrangement from the North. Tensions could flare with China, North Korea’s main trading partner, which only grudgingly signed on to the sanctions and would be likely to balk at keeping them in place if Mr. Kim is talking about peace.

Mr. Trump is also moving on other fronts that could undercut his negotiations with Mr. Kim. He appears more likely than ever to rip up the Iran nuclear deal as he faces his next deadline of May 12 to decide whether to reimpose sanctions on Tehran.

Walking away from one nuclear disarmament deal while trying to strike another would be a trick, even for a self-proclaimed dealmaker like Mr. Trump.

There is little question, senior officials and analysts said, that the American-led sanctions, combined with Mr. Trump’s bellicose vows to rain “fire and fury” on North Korea if it threatened the American homeland, helped bring Mr. Kim to the table.

But Mr. Trump is only one of three actors in this drama, and perhaps not the most crucial one. Mr. Moon, a progressive former human rights lawyer, ran for office on a platform of conciliation with the North and has moved aggressively to deliver on that promise. He, not Mr. Trump, has set the pace and terms of the negotiation with the North, though American officials say that Seoul is closely coordinating with Washington.

North Korea’s Kim Jong Un and South Korea’s Moon Jae-in agreed on Friday to seek an end to the armistice agreement and sign a peace treaty, as well as achieve “complete” denuclearization.

But it’s not the first time leaders from the two countries have met.

While the latest talks might yield better results, the over-arching announcements aren’t too dissimilar to those made at the last two summits, which, in the end, achieved little. 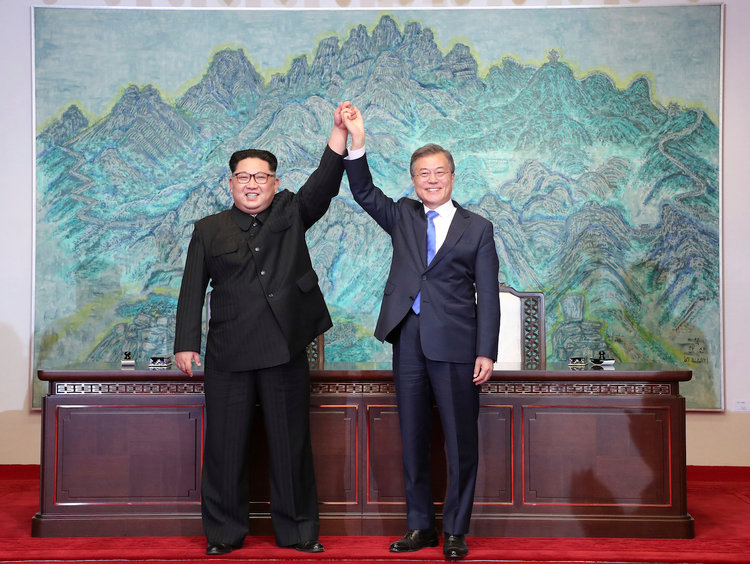 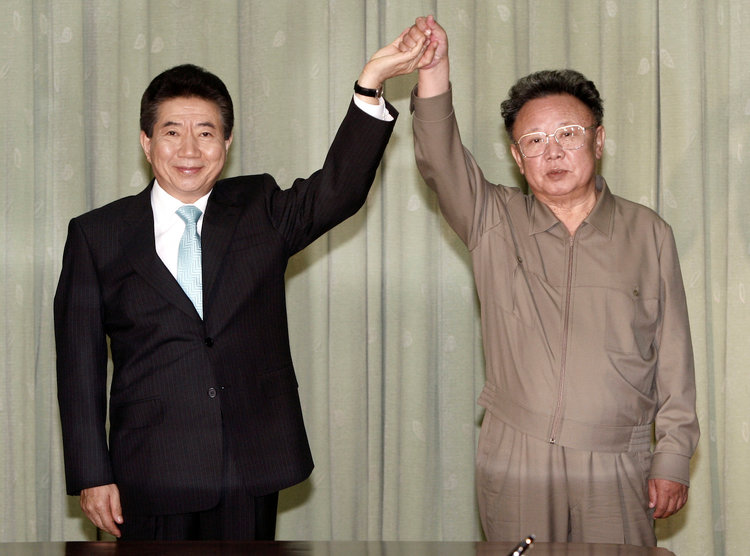 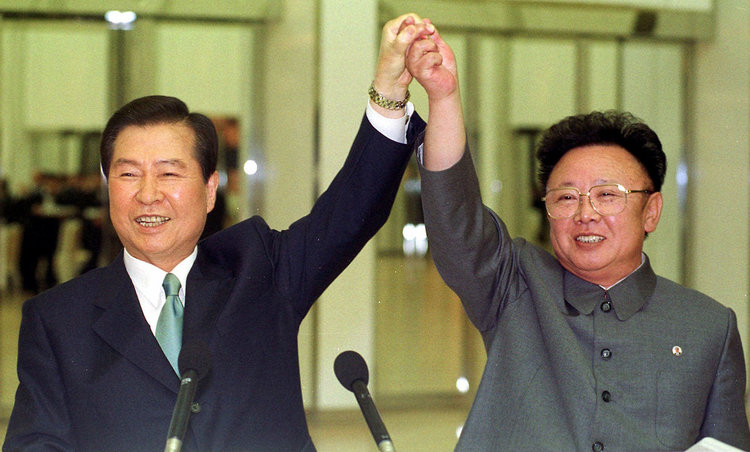 North Korean leader Kim Jong Il, right, and then South Korean President Kim Dae-jung raise their arms together before signing a joint declaration at the end of the second day of a three-day summit in Pyongyang on June 14, 2000.

SEE ALSO: North and South Korea agree to work toward a ‘complete’ denuclearization of the Korean Peninsula and end the Korean War