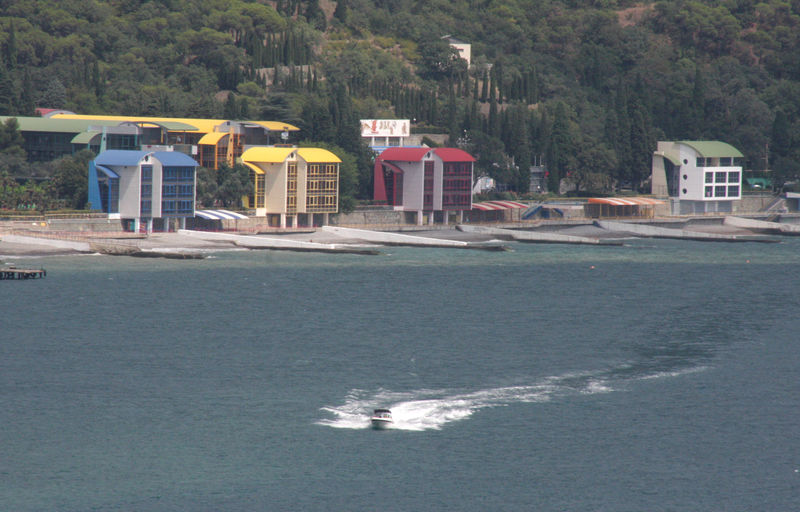 © Reuters. A general view of the Morskoi camp, part of the Artek International Children’s Centre, located near the city of Yalta

SEVASTOPOL, Crimea (Reuters) – News that Russia hosted the teenage children of Bashar al-Assad at a lavishly-rebuilt Black Sea summer camp in Crimea last year has given a rare glimpse into the personal lives of the Syrian president’s family and his close relationship to Moscow.

Nestled on the Crimean coast since 1925, the Artek Seaside camp served for decades as an elite summer holiday resort for children of those favored by the Soviet Communist Party and foreign delegations invited from its satellite states.

Russia has given the camp a $180 million renovation since seizing the Crimea peninsula from Ukraine in 2014. Guests stay in newly-built dormitories by the sea.

That Assad’s sons Hafez and Karim and daughter Zein had stayed there last year with a group of other Syrian children was made public only this week, when a Russian lawmaker on a delegation to Damascus said Assad had mentioned it.

Alexei Kasprzhak, the resort’s director, told Reuters he learned of the children’s identities only after they arrived last year. The three children were given no special treatment, joining the regular programme with the other Syrian children in their group, he said.

If any of the other Syrian children had any issues with being at camp with the president’s kids, “it passed quickly and didn’t create any problems for us and therefore we didn’t have to resolve them, thank God,” Kasprzhak told Reuters.

A source close to the camp’s management who spoke on condition of anonymity said the president’s children “didn’t stick out at all” during their three-week stay.

“They also attended all the events organized in the camp, they went to the evening campfire like everyone else, so it is not the case that they lived in some kind of special premises or slept on special pillows.”

The choice of destination shows how close Assad’s personal ties with Russia have become since Moscow entered the Syrian conflict in September 2015, turning the tide in his favor. Now in its eighth year, the war has killed more than 500,000 people.

The Seaside camp, 12 km (7.5 miles) from the Crimean city of Yalta, is the oldest of a network of 10 Artek camps run by the Education Ministry. During the Soviet era, winning a place there for a summer was a valued prize both for Soviet children and for visitors from countries in Moscow’s orbit.

In 2015, a year after Russia annexed Crimea from Ukraine, the Russian government launched a five-year programme to revamp it. As of last June over 11 billion roubles ($180.71 million) had been spent on renovations, the RIA news agency reported.

Records published on the state procurement site show that 9.2 billion roubles worth of tenders to develop the resort were awarded to Stroygazmontazh, a construction firm on U.S. and European sanctions blacklists, owned by Arkady Rotenberg, a former judo sparring partner of president Vladimir Putin.