Victor Moses’ second-half strike against Burnley has seen him leapfrog Alex Iwobi to be Premier League’s highest-scoring Nigerian this season.

The Nigeria international, who returned to Chelsea’s starting XI after making a cameo appearance in the Blues’ 3-2 victory at Southampton, struck in the 69th minute at Turf Moor, his third this season and 20th in England’s top flight. 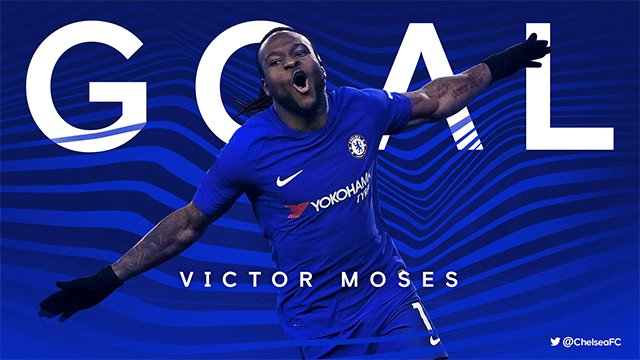 WE’RE BACK IN FRONT!

That strike moves Moses ahead of and fellow Super Eagles teammate Alex Iwobi, who has hit two goals in the Premier League during this term.

Leicester City forward Kelechi Iheanacho is third with just one goal with four games to the end of the season.

Iheanacho was the highest-scoring Nigerian last season with four goals, while Moses, Iwobi and Victor Anichebe got three apiece.

Yakubu Aiyegbeni leads the all-time chart with 95 goals AS Nwankwo Kanu (54) and Efan Ekoku (52) are second and third respectively.