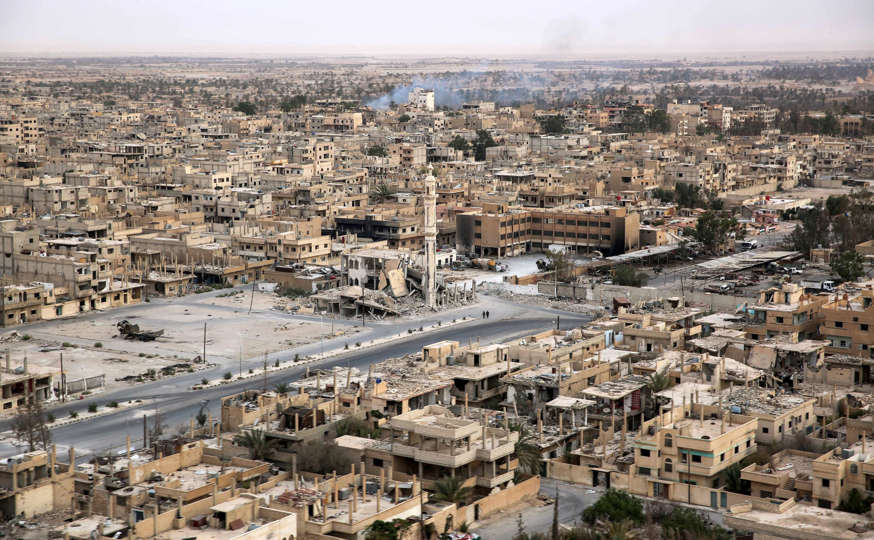 © DOMINIQUE DERDA/AFP/Getty Images A picture taken from a helicopter during a press tour provided by the Russian Armed Forces on September 15, 2017 shows an aerial view of the modern city of Palmyra…AMMAN, April 17 (Reuters) – A false alarm led to Syrian air defense missiles being fired overnight and no new attack on Syria took place, Syrian state media and a military commander said on Tuesday.

Syrian state TV reported overnight that anti-aircraft defenses had shot down missiles fired at an air base in the Homs area, and a media unit run by the Lebanese group Hezbollah said missiles had also targeted an air base near Damascus.

The incident underscored fears of a further escalation in the Syrian conflict after a U.S., British and French attack on Syrian targets on Saturday and an air strike on an air base the previous week that Damascus blamed on Israel.

Syrian state news agency SANA cited a military source as saying a number of air defense missiles had been fired but no foreign attack had taken place.

Separately, a commander in the regional military alliance backing the government attributed the malfunction to “a joint electronic attack” by Israel and the United States targeting the Syrian radar system.

The issue had been dealt with by Russian experts, said the commander, who spoke to Reuters on condition of anonymity.

State television had showed pictures of a missile it said was shot in the air above the air base.

A Pentagon spokesman said there was no U.S. military activity in that area at this time. Asked about reports of the missile attack, an Israeli military spokesman said: “We don’t comment on such reports.”

Saturday’s strikes by the U.S., Britain and France were in retaliation for a suspected chemical weapons attack by the Syrian military in eastern Ghouta. Both Damascus and its ally Russia have denied using any such weapons.

(Reporting by Laila Bassam in Damascus and Suleiman al-Khalidi in Amman; Additional reporting by Nayera Abdullah in Cairo, Yara Bayoumy in Washington and Maayan Lubell in Jerusalem; Editing by Angus MacSwan)