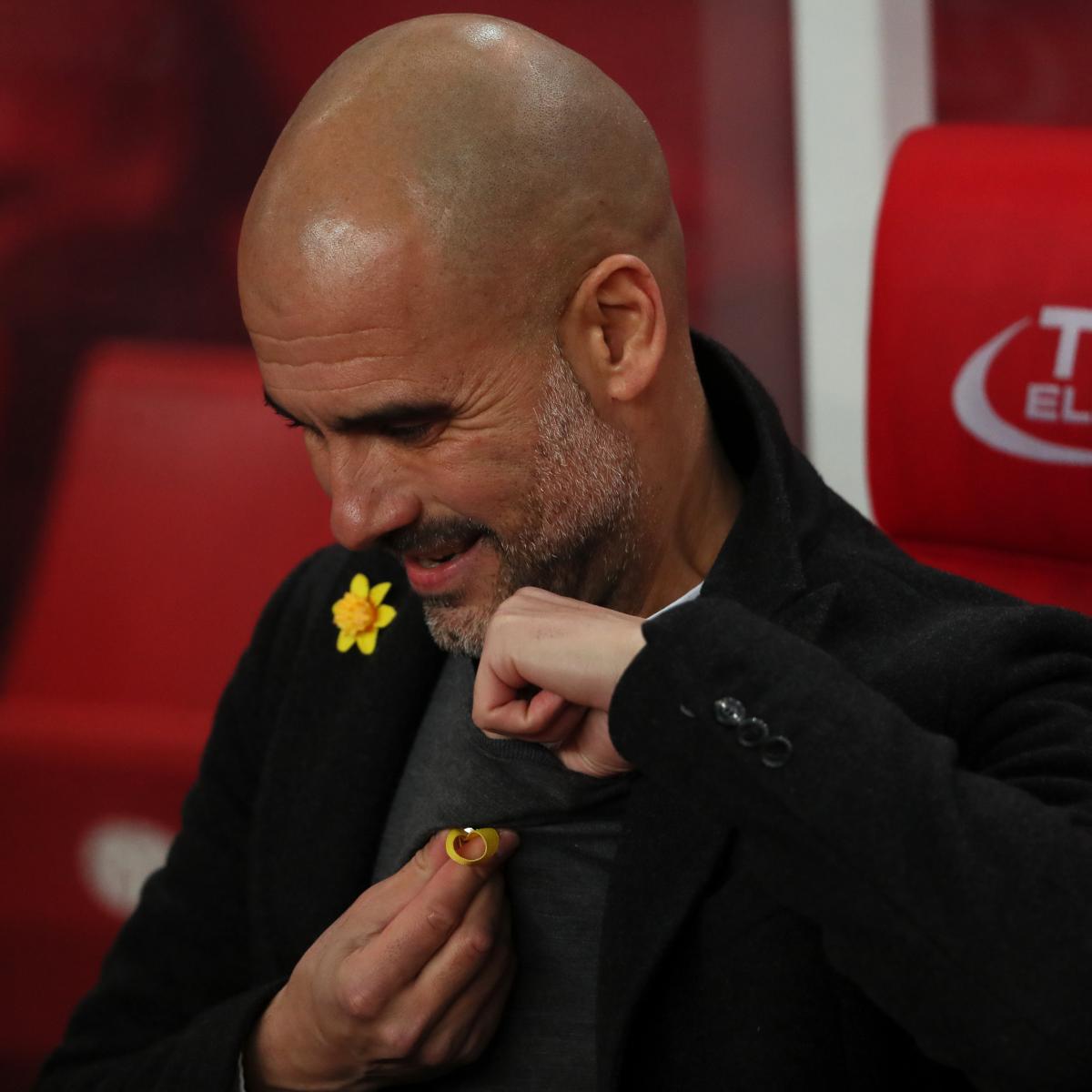 Pep Guardiola has done it again. In his ninth campaign as a top-flight manager, Guardiola has won his seventh league title. His club Manchester City were crowned champions on Sunday night after Manchester United’s shock 1-0 defeat at Old Trafford to bottom-placed West Brom. Back in his Catalan homeland, Guardiola’s achievement, in becoming the first Spanish coach to win the English Premier League title, has been celebrated.

“Here’s a guy who has spent many years in the front line,” says Josep Maria Minguella, who worked as Guardiola’s agent when he was a player. “When Pep played, he was a champion with Barcelona—he won leagues, cups, European Cups. As a trainer, he has spent a decade training the best teams in the world. In Catalonia, we’re very pleased with this situation—to have a man from here who has had so much success, to be so appreciated around the world.”

Catalonia’s newspaper of record, La Vanguardia hailed the “coronation of Guardiola”. Writing in Diario Sport, one of Catalonia’s two daily sports papers, Albert Masnou welcomed his triumph in a hostile footballing world: “The coach from Santedor [Guardiola’s hometown] has imposed himself in the English Premier League with mastery, having achieved what many predicted would be impossible: imposing his ‘tiki taka’ style in a football culture accustomed to other ways of understanding this sport.” El Periodico used some sarcasm to drive home its message on a related theme, suggesting Guardiola had emphatically answered his critic’s question: “Could [a Guardiola team] do it on a cold and rainy night at Stoke’s ground?”

The verve of Guardiola’s Manchester City side has enchanted this season, playing an often brilliant, attacking style of football, averaging almost three goals a game. It has wrapped up the championship with a month to spare, which includes a record 18 wins on the bounce, and with five games left to play—against five sides in the bottom half of the table—it could obliterate Chelsea’s 95-point haul in 2005 and finish the season with 100 points or more.

“It’s probable that Man City will finish the season having won around 85 percent of their matches,” says Marti Perarnau, a Barcelona-born former Olympian and author of two behind-the-scenes biographies of Guardiola. “This is an extraordinary ratio, which makes it one of the greatest teams in the history of the English Premier League without the slightest doubt. He has broken many records in the history of the league and, above all, the manner of the team’s play has been spectacular, and has created a great identification between the team and its fans.”

Aitor Lagunas, editor of Panenka, the acclaimed Spanish football magazine which is based in Barcelona, says that Guardiola is one of only three managers in more than a generation who has changed the nature of the game, alongside Arrigo Sacchi at Milan and Guardiola’s mentor, Johan Cruyff who plucked Guardiola from obscurity as a skinny 19-year-old to become the fulcrum of Barcelona’s “Dream Team” in the early-1990s.

Guardiola’s conviction in supporting Catalonia’s push for independence—including a publicised decision to wear a yellow ribbon during Manchester City’s matches this season in solidarity with several imprisoned Catalan agitators, which incurred a £20,000 fine and warning for “wearing a political message” from the English FA, per Guardian—has burnished his reputation beyond the fields of football for many in the region.

“You will find a lot of Guardiola lovers in Catalonia because of what he achieved as a player but mainly as a coach,” says Lagunas, “and as a political guy—someone who is making political statements in a difficult moment in Catalonia where the society is almost split in two halves. He’s the greatest and the biggest ambassador for the Catalan cause right now.

“No one has more power in terms of echo from the press and social media than Guardiola, much more than Carles Puigdemont, who is the current president-in-exile. It’s why in parts of Catalonia, but predominately around the rest of Spain, people have made Guardiola into a figure of ridicule. For example, one Spanish TV journalist tweeted ‘Liverpool 3 Yellow Ribbon 0′ [after Man City’s first-leg Champions League quarter-final defeat]. For a guy like Guardiola to be brave enough to make political statements about what’s going on in Catalonia has made him enemies.”

Guardiola has been caught in the crossfire of some serious political games. Per the Times, Guardiola has twice had his private plane searched by Spanish police in a hunt for the fugitive Puigdemont, who was released on bail from a German prison in early April. On the same day Puigdemont was freed from prison, El Pais, one of Spain’s newspapers, published an opinion piece in which it criticised Guardiola for spreading “lies” about the Catalan separatist cause on the international stage, comparing him to Joseph Goebbels, the Nazi Party’s notorious propagandist.

“It’s not Pep’s fault he is unpopular with some people in Spain,” says Minguella. “Catalonia is a region that historically has had problems with the rest of Spain, particularly with the centre in Madrid. There’s no middle ground. If there is someone Catalan who stands out like Guardiola, there will be people who don’t like it, but if you like football, I believe you’ll like the football of Guardiola no matter what the colour of your shirt.”

It perhaps isn’t surprising that Guardiola has so many detractors in Spain because of his public support of Catalan independence. What is curious, however, is how unpopular Guardiola is within Catalonia with a large section of Barca’s fanbase, the club that historically is so identified with Catalan separatism and where, of course, he first made his mark as a coach, becoming the youngest man to win the Champions League at the end of his first season in charge, May 2009. Something is broken between himself and a cohort of the club’s fans because of his abrupt departure from the club—in which he cited exhaustion—in 2012.

“There are a lot of Catalans who don’t forgive Guardiola because of his ending after four seasons at the Camp Nou as a coach,” says Lagunas. “The last time he returned to the Camp Nou—as coach of Bayern Munich in 2015—it was not unanimously applauded and welcome. In Catalonia, there are people who don’t like Guardiola.

“The hope amongst Barca fans was that Guardiola would become the Catalan Sir Alex Ferguson, although I think you have no less than 1,000 differences between Guardiola and Ferguson. Guardiola left Barca in the best moment of its whole history. It left a lot of people angry and sad. Now a lot of people are saying it wasn’t ‘Pep’s team’, which was the main nickname of that team in those days, but ‘Messi’s team’ because Barca has kept winning things after Pep left the Camp Nou, which is true but Guardiola was the first coach to build the team around Messi.”

After an underwhelming first season in charge at Man City, Guardiola has picked up two trophies this season. He has, however, come up short again in the Champions League, going out in the knockout stages for his sixth season in a row as a manager, which includes three semi-final defeats with Bayern Munich. It has given his critics another stick to beat him with, a blot on an otherwise incredible CV—he has amassed 23 trophies during his managerial career, according to Diario Sport.

Perarnau says it is mistake to judge Guardiola harshly for failing to win—often with fancied squads—the Champions League since 2011. “Football is the most uncertain sport there is—the one that admits the least amount of assurances and certainties,” he says. “In a league competition, the high number of matches moderates this factor, but in the Champions League it is always a toss-up and any small detail changes your destiny. Why has Barcelona, with Leo Messi in its ranks, not managed to win the Champions League every year? For the same reason: because successes or individual errors in the Champions League are uncontrollable. No coach has been able, can or will ever reduce those errors to zero.”

It is a call for reason that is endorsed by Lagunas. He cites Roberto Di Matteo’s improbable Champions League victory as coach of Chelsea in 2012, a glorious interlude in an otherwise inglorious managerial career.

“In 50 years, no one will remember Di Matteo,” he says. “I don’t know if Guardiola will win another Champions League trophy, but if someone is writing a book about the history of football in 50 years, Guardiola will have to be mentioned in it. In the same way that today, we still remember the Hungary team from 1954 or the Holland team that didn’t win the World Cup in 1974.

All quotes and information obtained firsthand unless otherwise indicated.