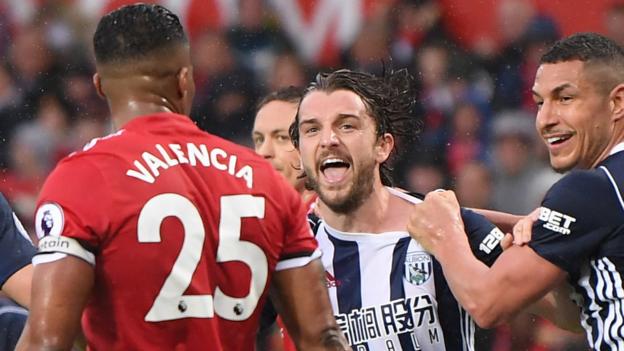 Manchester United lost to bottom side West Brom in a result which saw Manchester City crowned as Premier League champions.

West Brom secured the victory at Old Trafford thanks to a Jay Rodriguez header from Chris Brunt’s corner as United failed to clear their lines.

City now have an unassailable 16-point lead over Jose Mourinho’s side at the top of the table.

United’s best chance of the game was a Romelu Lukaku header, which was superbly saved by Albion goalkeeper Ben Foster.

City manager Pep Guardiola had claimed he would be on the golf course on Sunday afternoon and would not watch the game.

The win was West Brom’s first since a 2-0 success over Brighton on 12 January and only their fourth all season.

However, Premier League survival still looks unlikely for the Baggies, who are nine points adrift of 17th-placed Swansea with four matches to play.

Man Utd leave the handbrake on

Last weekend saw United complete a stunning comeback victory over City as they came from 2-0 down to win 3-2 at the Etihad Stadium.

In that match, Mourinho’s side produced a poor first-half display before they rallied to deny City what would have been the sweetest of coronations as champions.

United should have been surfing the crest of the wave following that victory, but instead they fell flat against West Brom.

At times, there is the unerring sense Mourinho’s United begin matches with the handbrake on, with players shackled by the Portuguese’s tactical straitjacket.

It is almost as if they need a cause to rally against before they deliver the kind of attacking play that Old Trafford yearns for.

With the exception of the chance for Lukaku – and a penalty appeal when Ander Herrera was caught by Craig Dawson – it was a soporific first half for the home fans.

It is hard to imagine United would have approached a home game against the bottom club in such a way under Sir Alex Ferguson’s management.

Ferguson would have trusted United’s players to play with freedom and blow West Brom away, which begs the question of whether Mourinho has the same faith in his squad to deliver.

“Attack, attack, attack” was the call from the Stretford End in the second half and while United were more purposeful with the directness of Jesse Lingard and Anthony Martial, they could not find an equaliser.

Perhaps the only comfort for United supporters is that City were denied the kind of thrilling champagne moment that fans crave.

Instead, the title was decided on a wet Sunday afternoon when the new champions were not playing. It is hard to imagine City’s players and Guardiola being too bothered by that, though.