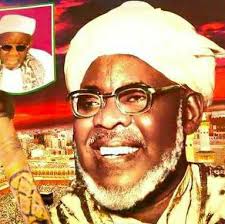 During the Maulud celebration in Abuja yesterday April 14, a group of worshipers has claimed to see the face of the dead Muslim cleric Sheik Inyass on an electric pole. The news caused an uproar as many believed the face appeared on purpose to mark the celebration.

Many worshipers were seen struggling to climb the pole as to touch the face of Sheik Inyass as it is believed will be a blessing to them. The face they claimed to see on a pole belongs to Sheik Inyass who was a powerful Muslim cleric who died about 37 years ago.