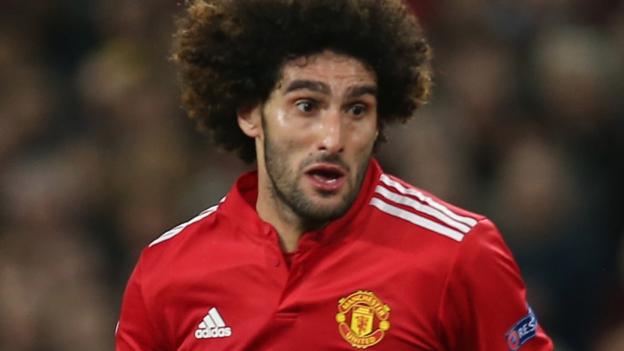 Liverpool have drawn up a three-year deal for Manchester United and Belgium midfielder Marouane Fellaini, with Paris St-Germain and Monaco also interested in the 30-year-old, who is out of contract at Old Trafford in the summer. (L’Equipe – in French)

Manchester United are hoping to beat rivals Manchester City to the signing of Shakhtar Donetsk and Brazil midfielder Fred, 25, this summer. (Mirror)

Who is the jewel in his side’s crown?

Mourinho was struck by a pound coin thrown from the crowd during Manchester United‘s derby victory over City on Saturday, but the Portuguese did not report the incident. (Star)

Tottenham midfielder Christian Eriksen says there have been arguments in the dressing room over whether he or Harry Kane got the final touch on Spurs’ second goal against Stoke on Saturday. (Independent)

Bayern Munich will offer new contracts to Frenchman Franck Ribery, 35, and Dutchman Arjen Robben, 34, with their current deals expiring at the end of the season. (Bild – in German)

Sheffield Wednesday‘s 19-year-old forward George Hirst – son of ex-Owls striker David – is set to join Manchester United, with the Championship side due compensation for the move. (Mirror)

Dutch league leaders PSV Eindhoven say Everton have made an approach for their director of football Marcel Brands. (Sky Sports)