Being in the House and playing the game is one; handling external backlashes however will be whole different ball game. 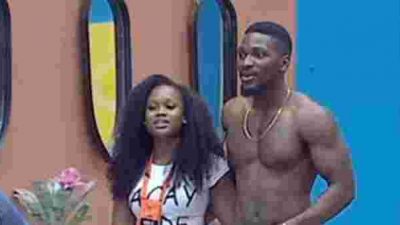 The immediacy provided by social media benefits both ‘good-willers’ and ‘predators’ alike, affording both viewing spectrums free reign to explore different perimeters of communication, share unsolicited opinions and to bring out unseen alter egos; and seeing as the 25 million Naira journey has about come to an end, the Housemates will most definitely be fighting a lot of virtual battles thanks to the viewers’ perceptions of them and whether they’re ready or not, here it comes.

Nina and Miracle definitely managed to place themselves on ‘sweetheart’ pedestals thanks to their goosebump giving moments, however, the love birds came into the show as units and that’s exactly how they’ll be handling themselves out there. Seeing as Miracle successfully cracked the shell in which he was enclosed initially, he might just have a bit of control when dealing with haters but for Nina, it might just be a different ball game.

Lolu’s ‘wise man’ and ‘word-smith’ traits have certainly won him favour with intellects and empathizers alike. Having ever been on the defensive front when dealing with quarrels, he’s managed to keep his hands clean and because of that, might have very little backlashes to deal with, or so we think. Despite having thrown hints of being a Yoruba demon and having a slippery tongue, Tobi has managed to redeem himself and was consequently placed on the ‘friendship goals’ pedestal. He too might handle backlashes quite gracefully.

Khloe and Anto are unarguably covered in thick skin thanks to having been outside and for that reason, are more likely to brush off the insults and thrive on the good vibes.

Alex has never been ashamed of her colourful and uniquely messy personality, often perceived as noisy and disturbing. In fact, she suffered a few heavy backlashes but quickly bounced back and held her own. Just like Cee-C, her ‘fireball’ demeanour isn’t at all what she adopted in the House but an innate trait she often uses as a defence mechanism. The two obviously care less about external opinions. While their battles promise to be great, they’ll most likely hover over them and survive.

The Former and The Latter

While the Housemates are aware of the risk factors, with the exception of Anto and Khloe who’d experienced both the good and the bad first hand post-Eviction and pre-bring back; their different personalities will definitely come into play when handling themselves out there because what was no longer will be, it’s either they sink or swim.